You are here: Home > The Problem of Time

The Problem of Time

What is time? This is the central mystery of physics. One might think that physics would give a clear answer. Not so. Although most physics is about change, it has lost touch with time. Indeed physics now cloaks time in myths. Let’s see what we can find behind them.

‘The Problem of Time is that ‘time’ in [general relativity] and ‘time’ in ordinary quantum theory are mutually incompatible notions, which is problematic in trying to put these two theories together to form a theory of Quantum Gravity.’

General relativity (GR) is a successful theory of the world. So too is quantum theory (QT). Quantum gravity (QG) aims to bring them together. The challenge isn’t merely blending a black hole with a charm quark. These theories clash at their deepest levels, including their concepts of time. GR says mass and gravity exist in warped spacetime; it has no simple time one can observe. QT studies how fields (whatever they are) evolve in observed time.

Inconsistent theories are part of the problem. The main problem is that we don’t understand time. Physics even doubts that time exists. And physicists who use time (as most do) use various versions of it. Italian physicist and philosopher Carlo Rovelli lists nine kinds of time and cautions: ‘This list must not be taken rigidly.’

Isaac Newton’s absolute time was the mainstay of physics for almost three hundred years. Some physicists believe that special relativity (SR) abolished absolute time. Actually SR shows only that an absolute time is not necessary to explain what observers see when watching moving clocks. (More importantly it shows the speed of light must be a fundamental property of the universe, but can’t explain this.) These days, we need absolute time to make sense of many cosmological observations.

So, switch from physics to philosophy: What does all this tell us about time? It says ordinary time (Newton called it ‘relative’) is about motion. Imagine you are in a world where nothing moves, not even nerve impulses in your brain. Time would have no meaning in that universe. Simply put, relative time is about motion. Inventing SR, Einstein was concerned with clocks. And all clocks use motion of one kind or another to define their ‘time’. Einstein didn’t care what time is. He wanted to explain what clock watchers observe.

Cosmos watchers are different. Imagine observers sprinkled through the universe. Everything they see began at the same instant. That is, the part of the universe where each observer sits has been in existence for exactly the same absolute time. True, when a distant observer tells you of her observation you will need GR math to decode her message. But your decoding tells you that the observations make absolute sense: the age of the universe is everywh 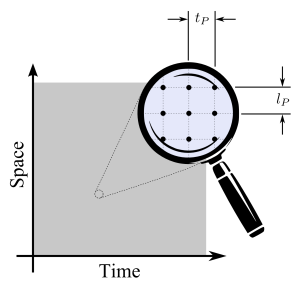 From a philosophic point of view the most interesting observer must sit outside the universe. As Greek physicist Fotini Markopoulou observes, this is unphysical. But then so is Einstein’s observer moving at the speed of light; he didn’t let this stop his thought experiments. What would this outside observer see? He’d see a universe that is 3-D. It would not move (it has nowhere to go) but would change stepwise. At each step it would be a slightly different 3-D universe. If he could check each stepwise change against a clock inside the universe he’d say each step takes just one Planck time, tP = 5.39106 × 10-44 s. Every clock throughout the universe would give him the same answer.

What then is time? Local or relative time and cosmic or absolute time are concepts we devise to
describe change—motions of things nearby and changes of the universe entire, respectively.

The moral of the cosmic story is: The universe has neither past nor future; now is all there is.

Edward Anderson (2013), “The Problem of Time and Quantum Cosmology in the Relational Particle Mechanics Arena”, http://arxiv.org/abs/1111.1472

Colin Gillespie (2013), Time One: Discover How the Universe Began, New York: RosettaBooks, p. 165, http://www.rosettabooks.com/book/time-one/; “The Problem of the Speed of Light”, http://www.timeone.ca/chapters/the-problem-of-the-speed-of-light.pdf