You are here: Home > Science of Cancer Care

Good news for patients who need cancer radiotherapy about ways to devise more-effective and less-harmful cancer treatments using radiation. Also, good news for radiobiology researchers who design experiments to better understand and measure what is actually going on when radiation is used to kill cells.

Both flow from a definitive book published by Canadian biophysicist Donald Chapman and British medical physicist Alan Nahum. [Disclosure: it cites some of my own work with Don Chapman and others on cell-killing mechanisms.] It shows how understanding the physics of irradiating DNA in living cells can benefit patients. It is the only such work that shows two independent mechanisms of cell killing that are physically and mathematically distinct. Its publication should benefit all who need radiotherapy for cancer. Anyone who is planning radiation treatments for patients can learn from this book and find ways to improve their treatment outcomes. And it should revolutionize radiobiology research. The book is technical. But, for the interested potential patient, here is the short story of scientific discovery and how it could help to save your life.

The basic idea of radiotherapy is simple. Radiation kills cancer cells. But treatment planning for patients with tumors of various sizes and stages using radiation of different kinds and energies is complex. Its aim is to find a way to kill the cancer while sparing the patient: radiation kills normal cells too. Enough of them must survive to restore organ function. Tumors tend to be ill-defined and are often inaccessible. Thus treatment depends strongly on differential killing—the degree to which more cancer cells than normal cells are killed by the radiation. Getting the best possible differential is a matter of life and death. Chapman and Nahum show how differential killing depends upon the physics of the way that radiation kills a living human cell.

Radiation consists of particles of energy (a.k.a. photons, such as X-rays) or of matter (particles of matter such as ions). These 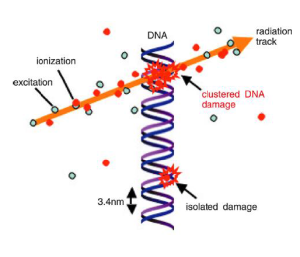 particles kill a cell by breaking DNA in its nucleus. DNA has two strands closely wound together with each one bearing the full genetic information that allows the cell to function. Roughly speaking breaks in both strands close to each other (a.k.a. a double-strand break or DSB) can kill the cell. There are two ways a DSB can happen. A single particle can cause breaks in both strands close together—a single-event DSB. Or one particle can cause a single break in one strand, and another particle can independently break the other strand nearby, maybe minutes later—a two-event DSB. A cascade of chemistry follows within microseconds of these events. Then there are slower biological processes such as repair of single-strand breaks. Understanding the physics of how radiation first deposits its energy in DNA and in its surrounding water on a scale of femtoseconds (a millionth of a billionth of a second or 10-15s) leads us to find tools that maximize the all-important killing differential.

Research in many laboratories quantifies the killing of various types of cell by different kinds of radiation in Petri dishes. Chapman and Nahum show how, when done under specific conditions and analyzed correctly, such research can yield data about the two types of cell killing. These data can then be used to prepare treatment plans for individual patients.

For example, photons (X-rays and gamma rays) typically yield a higher proportion of the two-event process than do ions. But in growing tumor cells the single-event process has a higher killing differential. To take advantage of this, treatment planners can split up the total radiation dose (into so-called dose fractions).They can consider the effect of dose rates and SSB repair. They can determine the best treatment, including how the total dose is divided into fractions and the total time taken to deliver it, using data for the cell type of a specific tumor and the kind of radiation.

It’s in the nature of radiation that each strand-break event in each cell is random. Even at this microscopic level radiotherapy involves a gamble. Treatment planning is about improving the odds. Patients whose survival and regained health are due to what their treatment planners learned about two mechanisms of tumor-cell killing will never know the details. But, in time, such patients may come to number in the millions.

See also previous posts on how to maximize health benefits and minimize the risks of ultraviolet radiation, aka sunshine, all part of the living-well-with-radiation story.