There are billions of black holes in our universe. Maybe gazillions. Stephen Hawking says they give off a strange kind of radiation. So we should see them, right? Here’s a cosmological Catch-22.

To set the scene, the Albert Einstein Institute says:

‘If, in our universe’s fiery youth, “mini black holes” of very little mass had formed, some might now have reached the stage where such violent evaporation occurs. So far, though, no astronomical evidence for highly energetic evaporation processes has been found, and Hawking radiation remains purely theoretical.’

So why can’t we find it? Here’s where we are heading: Each black hole was either once too hot or it is now too cold. Hot and cold black holes? They may sound complex, but we’ll see they’re easy. They will take us back to the beginning and we’ll find a clue to the mysterious Dark Matter.

This tale truly does belong to Hawking. Working with fellow British physicist, Roger Penrose, he made his name with black holes (aka singularities). He used the math of Albert Einstein’s general relativity (GR) to move them from sci-fi into cutting-edge physics. Soon everybody knew that nothing can escape a black hole, not even light; that’s why it is black. But then he used quantum theory to predict that black holes do give off radiation. If this radiation’s real, it means that every black hole will eventually shrink to nothing (remember, energy is mass).

This is where we get to hot and cold black holes. Hawking’s math says bigger black holes give off less radiation. One with larger mass behaves as if it has a lower temperature. Indeed big black holes are very cold. The temperature of the four-million-solar-mass black hole at the center of our galaxy (the Milky Way) is less than a trillionth of a degree absolute. Even a one-Solar-mass black hole emits a thousand-trillion-trillion times less energy than a small flashlight. So we cannot detect the faint glow a big black hole gives off. And it is not shrinking. It is bathed in background radiation left over after the Big Bang which, though very cold (2.7 degrees absolute), is far less cold than that black hole. So growth from background radiation falling in entirely overwhelms the shrinkage from Hawking radiation heading out.

In practice it is worse than that. A big black hole also sucks in gas that permeates the space around it. It grows bigger since it feasts far faster than it radiates. And it hides inside a blindingly hot mantle: its huge gravity squeezes the gas falling in, heating it to millions of degrees before it disappears inside. This is a second reason why there’s no way to detect Hawking radiation from a big black hole.

But small black holes (with masses much less than, say, that of our Moon) are quite another matter. 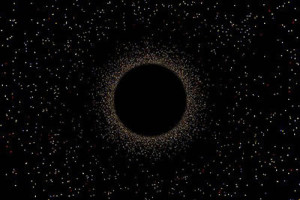 They suck in little gas and the holes themselves are hot. They emit enough radiation to shrink to nothing in a short time depending on starting size. The reason is that as a small black hole gets smaller it gives off more radiation (its temperature is inversely proportional to its mass). So, when a black hole disappears, its last gasp is a fiery sizzle, thought to be a signature burst of high-energy gamma rays. Forty years ago Hawking and a colleague, astronomer Bernard Carr, proposed that black holes with a range of sizes were created in the first moments after the universe began. They said, ‘There could thus be primordial black holes around now with masses from 10−5 g upwards.’ This was just before Stephen invented the radiation that makes them evaporate. If small black holes are around now we should see their final-sizzle signature. But, having been created in the beginning, the small ones would have vanished billions of years ago. So it’s a kind of cosmic Catch-22 for those who’d like to see the sizzles of dying black holes: black holes big enough to last till now are almost all too big to die.

But black holes big enough to stick around yet small enough to not grow into big black holes may well be hiding out there. A galaxy may contain billions that are larger than the Earth and smaller than the Sun. Are these the Dark Matter that Planck-satellite measurements say amounts to 26.8% of the mass of the universe? British astronomer Mike Hawkins says maybe. No need to hypothesize new particles that experiments have so far failed to find: just plain old black holes. So old they may tell us something about our beginning. Stay tuned.