You are here: Home > Future Travel: The Growing Role of High-Speed Trains

Intercontinental air travel is projected to grow faster than the supply of pilots to fly planes. But the future 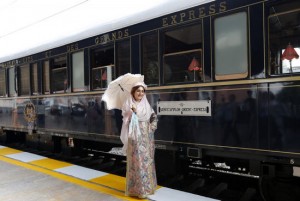 of regional travel belongs not to the air but to high-speed trains. This has deep implications for economic growth. The four top economies are dealing with this differently.

Fans of Murder on the Orient Express or The Great Railway Bazaar will have some idea of how trains once stitched Europe together. I took the Orient Express between Paris and Istanbul several times. In two days one could cross the continent, ensconced in sleeping car and restaurant. And one more or less still can in the USA. The pace of these old trains was—and still is—leisurely. Yet, for a hundred years or so, they were a revolutionary technology that built much of the Western world’s economy. Now Japan, Europe and China are building new trains. As we’ll see, the USA’s a different story.

In the 1960s Japan built the first mass-transit high-speed train, the Shinkansen, at first linking Tokyo and Osaka. Extended to 3,000 km of special track and running up to 320 km/h, the Shinkansen train system is now mature. It shows that high speed rail is safe, has the least cost per person mile, and helps the whole economy.

In the 1980s France followed with the TGV. Today, high-speed technologies and concerns about climate change are

driving a new rail revolution throughout Western Europe. Smooth welded rails snake up river valleys and through mountain passes to link major cities with fast trains. For example, ÖBB’s Railjet trains link Austria with Switzerland, Hungary, Germany and the Czech Republic at speeds that routinely top 230 km/h. Thus, leaving every two hours a train can whisk you from Vienna to Munich with Wi-Fi and good food, in four hours city center to city center; you can show up just before departure and you never wait in line. If you need to change trains some “legal” connections are only two minutes. Only North Americans and a few diehards fly, paying more and taking longer with less comfort. Europe’s investment in high-speed rail is already tens of billions. This could be central to its economic rebirth. Already, building the infrastructure is supporting its economy.

Six time zones away, much has changed since I saw anything of China. With the world’s worst pollution, it is now leading the world in green technologies and infrastructure. Around Chinese New Year, China Rail Corporation moves 150 million passengers in a few weeks. China has 20,000 km of high-speed rail in operation, more than half the world’s total. And for it too, building the new rail system is contributing to economic growth that has been triple that of the USA.

To date American rail travel has been the poor cousin. Amtrak has trouble keeping its slow trains on the rails. Its 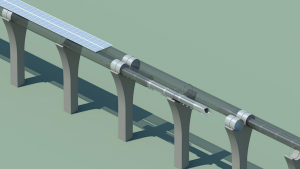 Acela Express is America’s only operating high-speed train. The Acela runs on 700 km of track between Washington, D.C. and Boston at a top speed of 240 km/h. Its track is shared and uses old infrastructure. It makes 14 stops. Average speed is little more than 120 km/h. Even so, more passengers now take this train than those who fly. The California High-Speed Rail Authority is constructing new track between Los Angeles and San Francisco. Other projects are mooted in the USA but not underway.

Of these, one stands out because it uses an entirely new technology. Elon Musk’s proposed Hyperloop would shoot passenger pods on air bearings through a vacuum tube at speeds up to 800 km/h. Its projected cost is less than ordinary high-speed rail. Two companies are vying to be the first to build. Imagine twin tubes on pylons following the Interstate freeway right-of-way. Downtown LAX to SFO in maybe 30 minutes! If it works it will change the high-speed transport game.