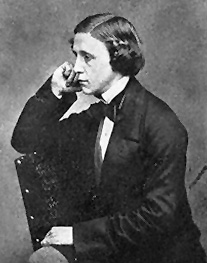 Lewis Carroll is the pen-name of English mathematician and Anglican deacon Charles Dodgson who wrote the Alice books.

Quotes by Lewis Carroll in Time One

“The time has come," the Walrus said, “To talk of many things: Of shoes--and ships--and sealing-wax-- Of cabbages--and kings-- And why the sea is boiling hot-- And whether pigs have wings.”

A slow sort of country!' said the Queen. 'Now, HERE, you see, it takes all the running YOU can do, to keep in the same place.

Would you tell me, please, which way I ought to go from here?' 'That depends a good deal on where you want to get to,' said the Cat. 'I don't much care where--' said Alice. 'Then it doesn't matter which way you go,' said the Cat. '--so long as I get SOMEWHERE,' Alice added as an explanation. 'Oh, you're sure to do that,' said the Cat, 'if you only walk long enough.'

‘Begin at the beginning,’ the King said, very gravely.

You could not see a cloud, because No cloud was in the sky: No birds were flying overhead - There were no birds to fly.

“The horror of that moment,” the King went on, “I shall never forget!” “You will, though,” the Queen said, “if you don’t make a memorandum of it.”

"There's no use trying … one can't believe impossible things," [said Alice.]" I daresay you haven't had much practice," said the Queen. "When I was younger, I always did it for half an hour a day.”