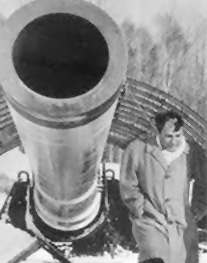 Gerald Bull was a Canadian engineer who specialized in long-range artillery and set out to build a great gun that could shoot satellites into space.

Quotes by Gerald Bull in Time One

[I]n the end, we want a theory that works on all scales―a theory that gives us both particle physics and cosmology.

[S]tring theory requires exactly ten dimensions to be consistent, no more and no less ….

Geometry, as it appears in physics, might be a phenomenon that’s “emergent” rather than fundamental.

[Calabi-Yaus] are alive and well and, if not living in Paris, are at least still prominent ….