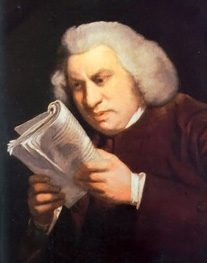 Quotes by Samuel Johnson in Time One

O'erspread with Snares the clouded Maze of Fate, Where Wav'ring Man, betray'd by vent'rous Pride, Then say how Hope and Fear, Desire and Hate, To tread the dreary Paths without a Guide; As treach'rous Phantoms in the Mist delude, Shuns fancied Ills, or chases airy Good.

No man will be a sailor who has contrivance enough to get himself into a jail; for being in a ship is being in a jail, with the chance of being drowned