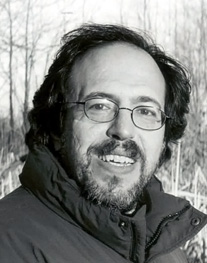 Lee Smolin is an American physicist and author of Three Roads to Quantum Gravity and The Trouble with Physics who co-authored with Sundance Bilson-Thompson two papers on how braids and twists in the fabric of space may be the basic building blocks of subatomic particles. In his most recent book, Einstein’s Unfinished Revolution, he reveals his ultimate ambition — to solve the problems tackled in Time One — and comes tantalizingly close.

Quotes by Lee Smolin in Time One

[I]f space really has a discrete atomic structure, then it is extraordinarily improbable that it would have the completely smooth and regular arrangement we observe it to have.

The problem is that in all the usual interpretations of quantum theory the observer is assumed to be outside the system. That cannot be so in cosmology.

When we have it, the quantum theory of gravity will provide new answers to the questions of what space and time are.

When we look on a small enough scale, we see that space is made of things that we can count.

The universe is made of processes, not things.

[W]e need a form of [quantum theory] that does not assume the existence of any classical background geometry for space. Loop quantum gravity is an example of such a theory.

[T]he real world out there … must exist independently of us.

… the greatest heroes in the history of science.... No one in human history has ever guessed correctly about such a large expansion of the known world.

… in loop quantum gravity appeared to contradict Einstein’s special theory. … [T]hat possibility was too scary to contemplate, and after struggling with this, I dropped the whole line of research.

SU(5) is the most elegant way imaginable of unifying quarks with leptons, and it leads to a codification of the properties of the standard model in simple terms. Even after twenty-five years I still find it stunning that SU(5) doesn’t work.

In this way, time is represented as if it were another dimension of space. Motion is frozen, and a whole history of constant motion and change is presented to us as something static and unchanging. If I had to guess (and guessing is what I do for a living), this is the scene of the crime.

The search for quantum gravity is a true quest.

We need a theory about what makes up space, a background-independent theory.

More and more, I have the feeling that quantum theory and general relativity are both deeply wrong about the nature of time.

It is mathematics, more than anything else, that is responsible for the obscurity that surrounds the creative processes of theoretical physics.

At present … the question of what happens inside of a black hole when quantum effects are taken into account remains unresolved.

No matter how smart she is, no matter how modern her methods and how tricky her reasoning, a detective cannot be a good detective unless in the end the bad guys are found out. It is the same with science.

What is the universe? Is it infinite, or finite?

[A] theory of a whole universe, if it is to be consistent with what we know of quantum theory and relativity, must be a theory of a complex, self-organized universe.

[N]o one has been able to construct a theory which is completely satisfactory as a unification of quantum mechanics and relativity. It is still not even clear whether this can be accomplished without a radical change in the basic principles of either, or both, theories.

[W]e now have in our possession laws that can describe correctly every experiment we have been able to invent.

According to general relativity every bit of the collapsed star and every particle that falls afterwards into the black hole will end up at a last moment of time, at which the density of matter and strength of the gravitational field become infinite.

It should also be said that for physicists relationalism is a strategy. As we shall see, theories may be partly relational, i.e., they can have varying amounts of background structure.

It is becoming clearer and clearer that the hardest problem faced by theoretical physics is the problem of accounting for the small value of the cosmological constant.

In science, detective movies, love or any other area of life, when one is confronted with a situation in which the old assumptions are no longer working as they used to, it is perhaps time to look for new questions to ask.

General relativity and supergravity, in any Spacetime dimension greater than or equal to 2 + 1, can be written as gauge theories, such that the configuration space is the space of a connection field, Aa, on a spatial manifold Σ. The metric information is contained in the conjugate momenta. The gauge symmetry includes the diffeomorphisms of a Spacetime manifold, usually taken to be Σ x R. The dynamics takes a simple form that can be understood as a constrained topological field theory. This means that the action contains one term, which is a certain topological field theory called BF theory, plus another term which generates a quadratic constraint.

Two of the biggest mysteries of modern science are then how these 35 or so parameters are determined.

The most popular theories, such as supersymmetry, have many more free parameters – the simplest supersymmetric extension of the Standard Model has 105 additional parameters. This means that the theory is unlikely to be tested in upcoming experiments.

Has physics reached an impasse, and what can we do about it? One source of the crisis is that many … theories have many freely adjustable parameters. As a result, some theories make no predictions at all.…

To continue the progress of science, we have to again confront deep questions about space and time, quantum theory, and cosmology.

One reason string theory is popular is that there is some evidence that it points to a quantum theory of gravity.

A growing number of theoretical physicists … see the present situation as a crisis that requires us to re-examine the assumptions behind our so-far unsuccessful theories.