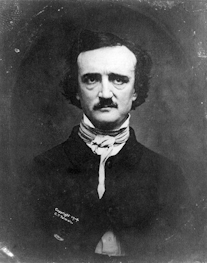 Edgar Allan Poe was a 19th-century American author who wrote Murders in the Rue Morgue and Eureka and who died in strange circumstances.

Quotes by Edgar Allan Poe in Time One

… one particle -- a particle of one kind -- of one character -- of one nature -- of one size -- of one form -- a particle, therefore, "without form and void" -- a particle positively a particle at all points -- a particle absolutely unique, individual, undivided, and not indivisible only because He who created it, by dint of his Will, can by an infinitely less energetic exercise of the same Will, as a matter of course, divide it.

Let us begin, then, at once, with that merest of words, "Infinity." … It stands for the possible attempt at an impossible conception.

[Y]ou can easily understand how restrictions so absurd on their very face must have operated, in those days, to retard the progress of true Science, which makes its most important advances -- as all History will show -- by seemingly intuitive leaps.

[B]y the term "Universe," … I mean to designate the utmost conceivable expanse of space, with all things, spiritual and material, that can be imagined to exist within the compass of that expanse.

And all my days are trances, And all my nightly dreams Are where thy dark eye glances, And where thy footstep gleams— In what ethereal dances, By what eternal streams.