You are here: Home > Not Getting Vaccinated Causes Autism

Not Getting Vaccinated Causes Autism

Vaccination matters to all of us. It is the first line of defence against bugs that could kill millions. Vaccination and autism have a fraught relationship. Now there is good news.

In 1998 a paper in The Lancet linked autism to vaccination. It was later proved to be a fraud. But now some parents refuse vaccinations—for themselves and their children—just to be “safe”.

It’s long been clear that something strange is going on. The incidence of autism rose at least tenfold in the last thirty years. Ditto schizophrenia. Why? It is a mystery. It’s the subject of many human epidemiological and animal experimental studies.

Now a paper in Science links the increase in autism to people refusing vaccinations!

American neuroscientists Myka Estes and Kimberley McAllister at the University of California Davis (UCD) examine the evidence from many studies in a review paper that supports a simple explanation: When a pregnant woman gets an infection it can affect development of the child’s brain. Zika virus is just the latest hot-button example. It now looks like many kinds of maternal infections—viruses like measles, flu and chickenpox; bacteria like those that cause sinusitis or pneumonia; even parasites—can lead to brain-development problems for children.

The common factor is that all of these infections activate the mother’s immune response. The evidence shows the effect is worse when the immune response includes high fever.

Of course even vaccinated people get infections. But vaccination cuts the impact of infections in two ways. One is obvious: Vaccinating people against an infectious disease makes them much less likely to get it and makes it less severe for the few who do get it.

The other is less obvious but even more important. As the paper’s authors say: ‘Explosive growth in the human population, urbanization, and climate change combine to drive emerging infectious diseases like Zika.’ And they go on to say: 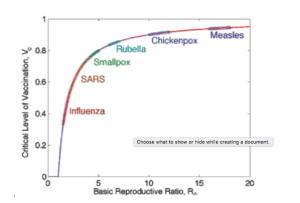 ‘… baseless fear of vaccinations within affluent groups has led to a resurgence of infectious diseases of the past, like measles, mumps, rubella, whooping cough, and even polio.’

Though they don’t use the term, our protection against epidemics of infectious diseases comes from a phenomenon called herd immunity. For each disease there is a critical level that depends on how infectious that disease is. Epidemics break out in populations with less than that level of vaccination and not those with higher levels. For the flu the critical level is about a half the population; for measles—which is far more infectious—the critical level may be as high as 95%.

The message from the math of infectious diseases is: My getting vaccinated protects you.

This is why I said that vaccination is a civic duty that we all owe to each other. The UCD paper gives us all a whole new reason to take this duty seriously. Every infection you don’t get is an infection you won’t pass along in a long chain of infections that can include pregnant women and affect the entire lives of future children.

Here’s a challenge: Take the shot!