Once in a while one comes upon a surprising good-news story. Evidence is flooding in to show our 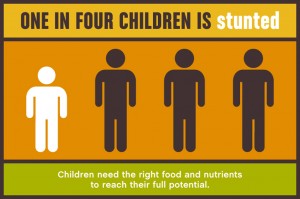 attitudes to our intestinal bacteria are wrong. As I wrote recently, the new view is simply: Bugs “R” Us. We have discovered that our inner microbes care for many of our basic needs. And now new evidence says gut microbes might help to stop stunting of the world’s starving kids.

Who’d’ve thunk it? Childhood malnutrition has long been a vicious problem. After the first three years of life its victims are permanently disabled. The Food and Agriculture Organization estimates it costs the world economy $3.5 trillion per year. More and better food often does not fix it. Even expensive dietary supplements do not work. But a study by a multi-national group of nutrition scientists suggests that gut bacteria could do the job.

Like all good studies of this kind, this one started with a hypothesis: that the makeup of the microbial 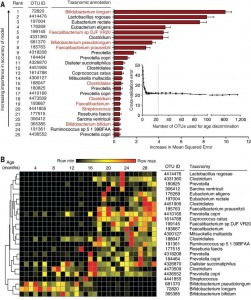 community in children’s digestive tracts must develop properly in order to nourish them. The researchers tested their hypothesis with experimental evidence. Of course you can’t just go around giving bacteria to hungry kids to see what happens. To treat them as experimental animals would be unethical. The researchers got around that problem. As we will see they got the kids to give bacteria to them.

To get at the problem this way, through the back door as it were, they first examined how the mix of bugs in stool of healthy infants in Malawi changes over their first three years. They used a new way of analyzing data about lots of variables (as in maybe hundreds of bug species) to identify the most significant species in this evolution. Eight to ten species were key. This gave the researchers a scale to measure maturation of the mix of bugs in healthy and malnourished children.

Armed with this understanding, they fed a Malawian diet to mice that were raised with no bacteria in their intestines. When they transplanted bacteria from malnourished kids into these mice, the mice grew poorly. When they transplanted bacteria from healthy kids into the same bacteria-free mice, fed the same Malawian diet, the mice grew well.

The authors say that ‘these studies reveal that specific beneficial microbes could potentially be exploited to resolve undernutrition syndromes.’

In other words: Better bugs could help malnourished kids to grow. And help the economy.